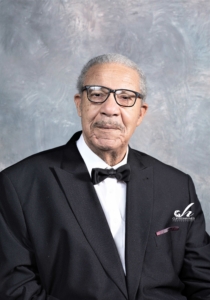 Reverend John Earl Cameron, Sr., the third pastor of Greater Mount Calvary MB Church, was elected in March 1970 and installed in April 1970.  Under his leadership, the worship service was changed from two Sundays per month to four Sundays per month. Communion was changed from the fourth Sunday to the first Sunday of each month.  Reverend Cameron welcomed students from nearby Jackson State University and invited them to make Greater Mount Calvary their home away from home. Under Rev. Cameron’s leadership, the church grew in membership, finances and organization for the greater work of the Lord Jesus Christ.

Rev. Cameron holds a Bachelor of Science degree from Rust College in Holly Springs, Mississippi and attended American Baptist Theological Seminary in Nashville, Tennessee. In 2006, Rust College bestowed upon Rev. Cameron the Honorary Doctor of Divinity degree for his contributions to the College.  In 2008, Rev. Cameron’s ministry reached the international community when he preached to the residents of a remote village on the outskirts of Lusaka, Zambia. In 2010, Greater Mount Calvary renamed its Family Life Center he John E. Cameron, Sr. Family Life Center in honor of him and in recognition of his dedication to the church.

Rev. Cameron is widely recognized as a civil rights icon, having contributed to the Mississippi Civil Rights Collection at Tougaloo College by recording an oral history of his experiences during the Civil Rights Era. He has played an integral role in the civic affairs of Jackson, Mississippi and in the state of Mississippi. He has served on the Governors’ Council on Minority Affairs, as a former board member of the Jackson Urban League, as Executive Director of the Greater Mount Calvary Community Development Corporation, as former Coordinator of Youth Affairs for the State of Mississippi, and as well as past historian of the National Progressive Baptist Convention.